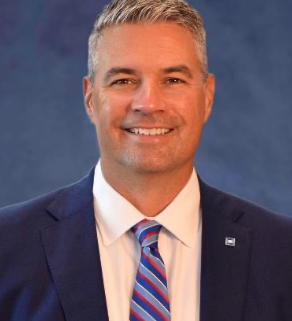 Chris is passionate about driving excellence through a culture based upon: 1) Love for one another,
2) Receiving feedback as a precious gift, and 3) Courageously leading change that drives continuous improvement. Through the application of his unique philosophy, both Baylor Scott & White – Waxahachie and Grapevine have been recognized nationally for their high quality of care and creation of a Five Star patient experience.
He is a Fellow of the American College of Healthcare Executives and serves on the board of various community organizations. During the first 15 years of Chris’ career, he was bi-vocational and served as a part-time youth minister. He received a football scholarship to attend East Tennessee State University, where he earned his undergraduate degree in Business Administration. He later received his MBA from ETSU, with an emphasis in Healthcare Administration.

Chris has been married to Jackie York, MD, Neonatologist, for 28 years. They have one son, Jack, who is a sophomore at Stephen F. Austin University.